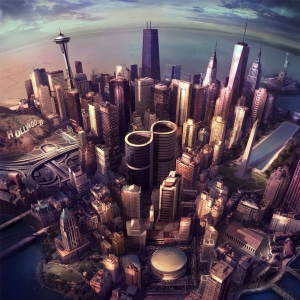 Let me preface this review for people who don’t know the concept of this album. Sonic Highways is eight songs each recorded in a different city and iconic studio that were collectively important in shaping american music. Each city and song was featured in an eight episode HBO documentary TV show with interviews of artists related to the local venue. An extremely ambitious project that turned out better than anyone can ever imagine. If you are a Foo Fighters fan or not this is the most important and inspirational album made in my lifetime. I came to the conclusion this year that the Foo Fighters are my absolute favorite band and have been for some time now because everything they do inspires me.

I sat down to write this review immediately after watching the final episode of the companion HBO show “Sonic Highways.” Why? Because it made me cry.

I cried tears of sorrow, because it was the last episode and it packed a punch. This record and TV show has left me wanting more. It filled voids I didn’t know existed. I want them to go back and do it again visit more cities like Detroit, Boston, Las Vegas, Miami, San Francisco, Cleveland and St. Louis. There are more stories to be told.

I cried tears of disappointment, because for too long now we have taken music for granted. I was guilty just as much as anyone else. The music industry is one of our most important national exports and we treat it like shit. Society does not encourage our children to become musicians instead we tell them to go to college and become doctors and lawyers. I have done the same thing, growing up music was my life, yet I haven’t encouraged my kids to play an instrument or start a band. It’s harder to make a lot of money in music since the digital age but it is so much easier to get your music heard. Technology has made it so anyone can self produce and promote themselves into a worldwide phenomenon. Yet we are not encouraging this in our schools, we don’t promote creativity enough. More money is spent on sports than the arts in our schools and it is sad. There is far more promise in becoming a creative artist than an athlete these days.

I cried tears of happiness, because Sonic Highways is everything I anticipated it to be and more. When I first heard of the concept of the band going to different cities and recording songs in different iconic studios, as a audio engineer, I was intrigued. I was looking forward to seeing all of these different studios and hearing the history behind the music that was made within their walls. What I got was so much more than that. While Gene Simmons is out there saying “rock is dead” the Foo Fighters are transcending and making music important again by just putting more effort into making a record.

It also helps that the songs are fucking awesome!! Each song on the album bleeds the the sounds and stories of the cities they were recorded while staying true to the Foo Fighters sound. Lyrics are drawn from the experiences and insights Dave Grohl got from the people he interviewed about the cities and the histories of each landmark in american music. They didn’t just set out to make a complex concept album, the songs can stand on their own as some of the best the Foos have ever made.

Favorite Tracks – Something From Nothing, Outside