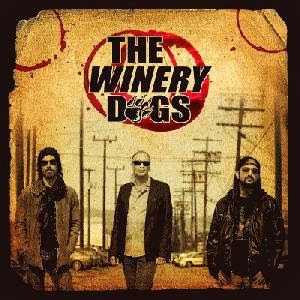 Producer – The Winery Dogs
I love when supergroups form into serious acts not just one off side projects. This year brought us The Winery Dogs, a supergroup consisting of drummer Mike Portnoy (Dream Theater), bassist Billy Sheehan (Mr. Big) and guitarist/vocalist Richie Kotzen (Poison, Mr. Big). One would think that a group consisting of three extremely technical players would turn out to be a jumbled mess. That turns out not to be the case with The Winery Dogs. The songs are written to play off each others technical skills and complementing each other and drawing back at the appropriate times. We in turn get an incredible hard rock album.

There is something to be said of Mike Portnoy’s drumming on a five piece kit who is known for playing monstrous 20 piece drum kits with Dream Theater. Portnoy explodes on the five piece with very tight intricate beats and fills.

Billy Sheehan is one of the bassists in the industry and this record proves why. Laying down complex bass lines that some how don’t over-complicate the songs and tie everything together.

Richie Kotzen is known for being an incredible guitar player and it is ever so apparent on this record. What he isn’t know for and where he shines the brightest is his powerful vocal prowess. Bluesy, soulful and edgy all in one.

The track We Are One is their showcase piece showing how they make all this work into one hell of a groovy song.

Favorite Tracks: We Are One, Desire

Listen to The Winery Dogs